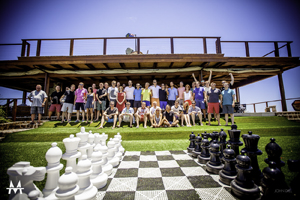 The Blockchain, Bitcoin and Property Rights Project aims to demonstrate how the five of the seven billion people in the world who cannot productively combine their assets can fully benefit from blockchain, the technology behind bitcoin digital currency. We are actively working with the main entrepreneurs and innovators of blockchain who have declared that their work is nothing less than the digitalization of the Mystery of Capital.

The 1st annual Block Chain Summit concluded May 28th 2015, on host legendary entrepreneur Richard Branson’s private Caribbean island. The goal of the event was to define a way that the world can fully benefit from Blockchain, the technology behind Bitcoin’s digital currency. A key moderator of the event, which gathered the top thinkers was Peruvian economist Hernando de Soto. According to co-host George Kikvadze, Vice Chairman of the world's leading blockchain infrastructure provider, the technology behind the blockchain is essentially the digitization of De Soto’s book, The Mystery of Capital.

Kikvadze who is also Managing Director of GCF, a $6 billion private equity partnership, stated that blockchain’s transparent digital transfer public ledger system is tamper proof and its ledger cannot be fraudulently manipulated because it is supervised worldwide by all its users.

Nearly everyone who attended the summit agreed that the system's adaptability and simplistic security procedures makes it ideal to serve humanity in many ways.  Especially to secure the legal property rights to 5 of the 7 billion people in the world, who own things but cannot productively combine them because they do not have the standard legal documentation that allows them to prove ownership over their assets or properly transfer and join them with other assets to produce additional wealth.

That is the thesis behind the Mystery of Capital: most of the things that we own are useful only when they can be joined into complex wholes. Humanity's achievements —from the 120 ingredients of a clock to the countless financial deals and developments that produce the internet and flight navigation systems— all result from the few people who are able to legally join and combine their talents and assets because there is legal clarity about the conditions for owning and transferring them.

The challenge that we are facing is how to plug in the formulas used by De Soto’s ILD to legally identify the chain of extralegal conventions that give the majority of the world’s population control over wide swaths of territory and resources but none of the legal devices required to develop them by entering into fruitful agreements with those who have that capability. Ranging across all continents in the world from Argentina, Brazil, Chile, and Colombia, to India, Nigeria and Turkey. If property rights were clearly defined in those areas, not only would the poor be able to lift themselves out of poverty by joining their belongings on a global scale but it would also lower the risks that international investors always face when investing in resource rich areas outside of the West. Thus, also significantly reducing one of the principal causes of conflict and violence worldwide. 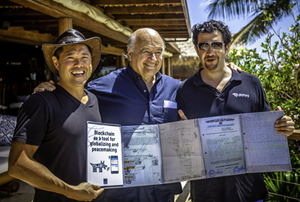 Another co-host of the conference, Bill Tai, is co-founder of Mai Tai whose community has accumulated a net worth of $7 billion, according to Forbes. Tai stated more precisely that the summit’s focus was not to disrupt governments and banks by messing with their currency systems’ but rather it was an effort to use the great minds invited to the summit to do good from a societal perspective. The plan was to crystalize a discussion of how modern open source technology, like that embedded in the blockchain, can be used to potentially solve some of the structural issues that lead to poverty and conflict.

In the words of Wall Street Journal columnist Michael J. Casey, who is the co-author of The Age of Cryptocurrency, ‘De Soto explained how blockchain could apply to property rights and specifically address controversies in mineral-rich parts of Peru’ that would allow multinational mining companies and neighboring households, farms, indigenous communities and other forms of informal property to receive adequate compensation and live in harmony by revamping Peru’s poorly designed artisanal title chain by plugging it into blockchain. In this connection, De Soto showed an artisanal title chain based on the case of farming communities in Cajamarca and Lambayeque (where the most important Peruvian gold concessions are operated by US and Chinese companies are located) that was so unclear that it led to confrontations between the mining firms and local people to the point of paralyzing major development projects, such as Conga in Northern Peru and Tia Maria in the South. 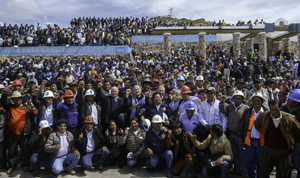 De Soto and the other attendees are now hatching plans to inscribe assets into a high-tech, digital currency blockchain in order to create a public ledger that would pick up the social contract and begin to legitimize both the interests of neglected farmers, artisanal miners and their land and water rights, as well as that of multinational companies so that both can prosper and live peacefully together within a global economy. In the same manner that miners and fruit growers learned to live with each other in California, as well nuclear plant operators learned to get along with vineyards owners in Switzerland.