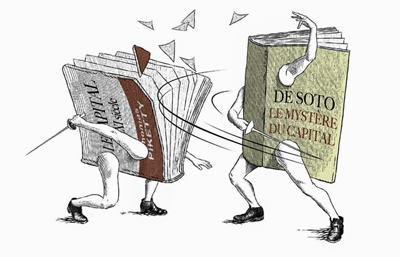 The Capital Project illustrates that recent attacks against capital over the last six years are unjustified. We have begun by challenging its most visible critic: Thomas Piketty and his worldwide best seller “Capital in the 21st Century” on his home soil, in France.  According to the editor of Le Point, France’s most prominent magazine, where the ILD’s essay was published, our reasoning “pulverizes our young Marx”. The concise essay, which is the first of many and may end up in a book, has been published in over 23 countries and will have covered all major nations and languages of the world by July 2015. France’s Le Figaro and Le Point are currently writing major pieces that will challenge Piketty to a debate against the ILD in Paris, in addition, there are at least three large academic institutions in the America’s and Chatham House in the UK that are interested. (See Exhibit B below: English translation of pro-capital article written by ILD against Piketty already published in Le Point on 16 April 2015).

The objectives of the project

We want to get out of the ghetto of “development economics,” -also known as tips on how-to-catch- up-with-the-rich- and demonstrate that our research has more universal implications.During the first 15 years (1985-2000) of ILDs existence we conceived and implemented some of the major reforms that transformed Peru from an economic basket case into Latin America’s fastest growing economy - all in all we drafted some 1000 pieces of legislation and regulations. ILD also designed and implemented the strategy that led to the only victory over terrorism in the last 40 years without the intervention of foreign troops.

During the second 15 years (2000-2014), our reputation expanded and over 40 Heads of State called us in from developing and former Soviet nations. Also various international organizations officially adopted our programs: ‘Doing Business’ at the International Finance Corporation, ‘Titling and Anti- Corruption’ at the World Bank, ‘Legal Empowerment of the Poor’ at the United Nations, and ‘Oppor- tunities for the Majority’ at the Inter-American Development Bank.

What’s behind all this is duly recognized good theory. However, because it derives from project de- sign and implementation in undeveloped countries, the conventional wisdom is that our work is part of “development economics”, a branch known mostly for finding shortcuts to catch up with developed nations. i.e., a ghetto where no one expects to find innovation of universal value.

Annex 2 below contains the original version in French of our pro-capital article written by Hernando de Soto against Piketty as was published in Le Point on 16 April 2015 and a complete English version of it.