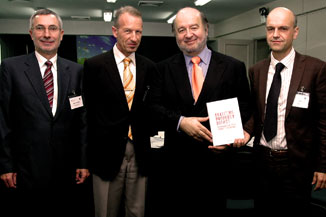 The Swiss Ministry of Foreign Affairs and the Institute for Liberty and Democracy (ILD) announced the publication of Realizing Property Rights, co-edited by Hernando de Soto, President of the ILD, and Francis Cheneval,

professor of political philosophy at the University of Zürich. The presentation took place June 23rd at the hotel Los Delfines in Lima during a seminar on property and human rights organized by the said Swiss Ministry featuring experts from all across Latin America. The book - the Spanish edition is titled El Derecho de Propiedad como Derecho Humano- brings together essays from the world's most distinguished authorities on the subject of property rights.

Mr. De Soto made a presentation to the conference on the ILD experience in developing countries throughout the world in which he argued that "nowadays one cannot speak of human rights without including property rights". The causes of poverty and exclusion, Mr. De Soto noted, are to be found in the lack of legal empowerment among the poor. On the other hand, specialists maintained that with the end of the Cold War the concept of property and its relationship with human rights began to transform existing paradigms.

The Swiss delegation was comprised of Professor Cheneval, Rudolf Knoblauch, Ambassador of the Ministry of Foreign Affairs, Natalie Erard, a government official, and Beat Loeliger, Switzerland's Ambassador to Peru. The ILD delegation included the institute's Legal  Director, Ana Lucía Camaiora, who also was one of the speakers.

Among the Latin-American specialists that participated in the seminar were Lorena Escalona from the Ministry of National Assets of Chile, Eduardo Navarro, representative for Argentina, María Cecilia Ladeira de Almeida, Regional Chief of the National Institute of Colonization and Agrarian Reform of Brazil, Sonia López, Director of Land Policy in Nicaragua, Santiago Cantón, Executive Secretary of the Inter-American Commission on Human Rights, and David Varela, Property Rights Director for the World Bank.