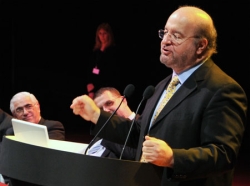 De Soto addressed more than 4,000 delegates at the foremost annual gathering of the world’s leading international association of lawyers, where he spoke about the relationship between law and economic development in the context of the global financial crisis.

IBA President and founding partner of law firm Gómez-Acebo & Pombo in Madrid, Fernando Pombo, declared prior to the Conference, ‘I am delighted that Hernando de Soto will open the IBA annual conference in Buenos Aires shortly. I am certain that the gathering will benefit tremendously from the insight and analysis of such an accomplished and thought-provoking economist. We are expecting this audience to be the largest ever at an IBA conference, with at least 700 delegates attending from countries in the Latin America region. Altogether, delegates will represent some 120 countries – truly, a global audience for a global economist.’

De Soto was greeted with a strong applause after addressing the group of international lawyers at the conference. During his 20-minute address, De Soto illustrated the relationship between law and economic development. In the context of the current global financial crisis, De Soto placed lawyers at the very heart of the solution by stating that ‘Lawyers hold the key to the world’s problems’.