The Institute for Liberty and Democracy (ILD), led by Peruvian economist Hernando de Soto, works with developing countries to implement property and business rights reforms that provide the legal tools and institutions required for citizens to participate in the formal national and global economy. ILD works toward a world in which all people have equal access to secure rights to their real property and business assets in order to pull themselves—and their countries—out of poverty.

CLEP's Final Report, “Making the Law Work for Everyone” 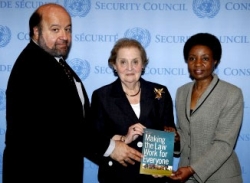 3 June 2008, United Nations, NY -The Commission on Legal Empowerment of the Poor (CLEP) today launched its Final Report, “Making the Law Work for Everyone”, at the United Nations in New York.

The product of research, analysis, and consultations in more than 20 developing countries, the report argues that four billion people are effectively excluded from the Rule of Law, and thus deprived of a chance to lift themselves out of poverty.

Exclusion, the CLEP report observes, comes in myriad forms: lack of legal identity, limited access to courts, deprivation of political voice, unrecognized property rights. Yet everywhere its implications are the same: a large part of society is denied a chance to participate on equal terms, and in consequence economic development is stunted. What is needed, the report argues, is a process of systematic change whereby the poor and excluded will be assured easy access to basic legal rights and services, which will in turn allow them to secure and leverage their resources.

Three years ago, the Commission co-chairs, the economist Hernando de Soto and former U.S. Secretary of State Madeline Albright,, together with 21 commissioners including former heads of state and government, cabinet ministers, jurists, economic researchers, and other senior policymakers, set to work out just how such change should and could be effected. The result is a comprehensive agenda for “legal empowerment” encompassing four crucial pillars: access to justice and the rule of law, property rights, labor rights, and business rights.

The Commission’s legal-empowerment agenda will provide policy-makers, NGOs, civil society groups and other development practitioners in general with a fresh and singular look at the old question of how poverty should be tackled. As the British Prime Minister  Gordon Brown observed in his foreword to the report, if properly followed, the work of the Commission will have “a profound impact on progress towards achieving the Millennium Development Goals.”