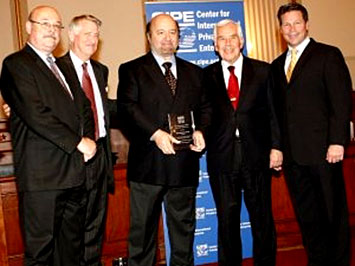 The Center for International Private Enterprise (CIPE), the global branch of the US Chamber of Commerce, has created the “Hernando de Soto for Democracy” Award, which will be presented annually to a CIPE partner who has followed De Soto’s path franchising entrepreneurs in the informal sectors of developing countries.

The 2009 prize was presented to De Soto himself for his contributions to democratic and market reform in Peru.  The presentation was made by two of the most respected foreign policy experts in the US Congress: Senator Richard Lugar, the senior Republican in the US Senate and the minority leader of the Senate Committee on Foreign Relations, and Congressman Connie Mack, the ranking member  of the House Sub-Committee on the Western Hemisphere.

A letter of congratulations to De Soto was also read from former US Secretary of State in the Clinton Administration, Madeleine Albright, who was attending a  NATO meeting in Bratislava.